Since his early childhood in a small town in India, Mahendra Kumar Trivedi displayed uncommon intelligence and perception. One night in 1995, he received enlightenment from the Divine, and a message that he was to share his gifts with the world, for the betterment of mankind.

Guruji Mahendra Kumar Trivedi earned his five-year Bachelor’s degree in Mechanical Engineering in 1985 and worked as an engineer for 10 years. In 1995, Mr. Trivedi discovered that he had the unique ability to harness the energy from the universe and transmit it to anywhere on the globe, infusing it into living organisms and nonliving materials to optimize their potential. For the next seven years, Trivedi applied this newfound discovery to helping people optimize their own potential. This unique phenomenon resulting from Mr. Trivedi’s biofield energy transmissions became internationally known as the Trivedi Effect. 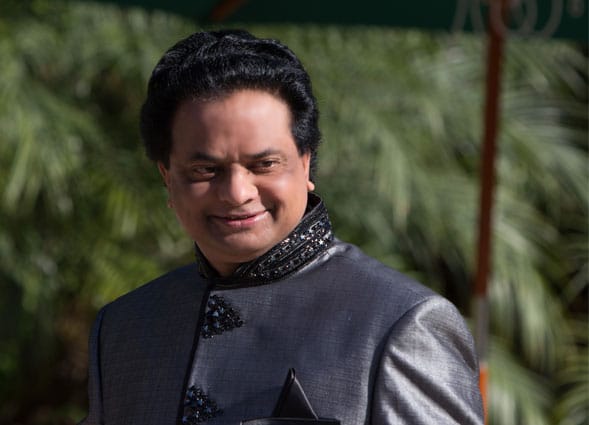 Although Guruji Mahendra Trivedi gained a vast and continuously growing body of human testimonials that testified to the capabilities and potential of his biofield healing on the human condition, Mr. Trivedi retained a healthy skepticism. More than 250,000 individuals have sought Mahendra Trivedi’s abilities and have attested extraordinary benefits from his biofield energy healing in their health, relationships, emotional health, mental potency, sexual satisfaction, finances, business ventures and much more, but Mr. Trivedi was aware of the power of psychological influence and people’s susceptibility to the placebo effect. As a result, Guruji Mahendra Trivedi wanted to assess the authenticity of the human testimonials through the application of the Trivedi Effect in the arena of science.

He amassed a collection of over 4,000 studies in life sciences and material sciences, including agriculture, livestock, biotechnology, microbiology, materials science, genetics, cancer and human health conducted with the most sophisticated technologies available on this planet, and currently he has nearly 200 publications in leading international peer-reviewed scientific journals. All of the scientific research and publications give profound support to the dramatic results reported through human testimonials, thus excluding the possibility of the placebo effect. All studies and publications have revealed results that have astounded scientists worldwide and have led to collaborations with leading scientists like Dr. Rustom Roy, a materials scientist from Penn State University who was nominated for the Nobel Prize 23 times. His extensive research and experimentation on the abilities of Mr. Trivedi’s biofield energy led him to say, “I see him as the completion of what India has brought to the world in modern scientific terms. … Science is the religion of the world. It’s going to be very tough for the establishment to hold onto old ideas. I think with Mr. Trivedi’s potential, he may become a pioneer in loosening the grasp of old science. I have no doubt Mr. Trivedi will change the face of science and human well-being in my lifetime.”

Guruji Mahendra Trivedi’s work within the international scientific community is extensive and ongoing. His research is an invaluable database for scientists attempting to understand the power of consciousness, energy medicine and the human biofield of energy. The Trivedi Effect is continuously being applied to a broad range of scientific fields to extend and transcend beyond the frontiers of the current scientific paradigm. By harnessing the potential and heightened capacity of the human biofield, Mr. Trivedi has successfully transformed living organisms and nonliving materials at the atomic, molecular and cellular structures of existence to greatly enhance and alter the characteristics and behaviors of the treated specimen.

Mr. Trivedi’s mission is to utilize the Trivedi Effect to usher in a new era that integrates scientific research with consciousness to vastly improve the human condition and benefit humanity on a global scale. Currently, he is collaborating with an international research organization to study the impact of the Trivedi Effect on nutraceuticals for overall health, prebiotics, probiotics, antioxidants, anti-aging and in products that can potentially treat cancer, obesity and inflammation. His pharmaceutical research aims to create new, revolutionary products for the benefit of all of humankind.

Mahendra Kumar Trivedi’s biofield transmissions have assisted people with a wide range of varying conditions and problems with varying degrees of severity that, with the support of scientific research performed at the California Pacific Medical Center Research Institute, it has been concluded that the biofield energy treatments administered by Mr. Trivedi have an inherent intelligence that treats each recipient and specimen uniquely. In one particular study at the California Pacific Medical Center Research Institute, Mr. Trivedi administered his biofield energy treatment to a mixed sample of both cancerous cells and noncancerous cells. The results showed that the biofield treatment was able to kill the cancerous cells while at the same time promoting the viability of the noncancerous cells:

“The results suggest that the biofield treatment administered in the laboratory can induce cell death of brain cancer cells from a distance while at the same time promoting the viability of normal brain cells. Such selective efficacy against cancer cells is the sought after ‘holy grail’ for novel experimental anti-cancer agents and makes this work all the more exciting.”

All forms of energy currently known to the world, such as electrical, magnetic, solar, wind, thermal, gravitational, optical energy and so on, have their own limitations and do not perform intelligently. No other energy on this planet is capable of controlling whether or not the object receives said energy, or how the object or specimen will react to the energy. Albert Einstein was highly frustrated with the limitations of these known forms of energy. Hence, he wrote the most philosophical statement in the history of science: “I, at any rate, am convinced that He [God] cannot throw dice.”  He began working on a Unified Field Theory, which theorizes that there is single energy within our Universe that is capable of doing everything.

In answer to Albert Einstein’s quest of a Unified Field of Energy, the scientific experiments conducted on the Trivedi Effect show that this is the only energy discovered and validated by science that has inherent intelligence.  This energy is not only able to distinguish between cancerous cells and noncancerous cells, but it also is able to treat each recipient uniquely, i.e. the same energy that decided to kill the cancerous cells also made the decision to provide life and greater viability to the noncancerous cells. Further, The Trivedi Effect does not require the specimen’s or object’s permission to “receive” the energy. This energy decides whether or not the object or specimen will receive it, as well as determines the outcome. This energy has affected every treated living and nonliving specimen uniquely within a controlled laboratory setting, which makes this phenomenon a remarkable discovery that is unique and without comparison.

A large and rapidly increasing number of people have experienced the Trivedi Effect phenomenon and insist that their lives have new meaning and they are feeling greater levels of happiness, love, compassion, motivation, indescribable peace, inspiration, intuition, spirituality, enthusiasm, intelligence, intellectuality, self-esteem, affection, pleasure, sexual orgasm and ejaculation, sentiments, empathy, calmness, deeper relationships, eagerness, as well as altered perceptions and a love of life. People say they have found their soul mates, while others have even insisted they have experienced Spiritual Awakenings by entering into levels of higher consciousness, while others say they feel deeply connected to their souls and to Spirit and have discovered their life’s purpose. Although Mr. Trivedi has no religious or spiritual affiliation and recommends everyone follow their own beliefs and inner guidance, people have found that the biofield energy treatments have created more profound experiences during spiritual and religious practices, like yoga and meditation, as well as heightened the potential and capabilities of many healers and health care industry workers, like Reiki healers and practitioners of Tai Chi, Qi Gong, Healing Touch, Energy Healing, Energy Medicine, etc., even though Mr. Trivedi does not endorse any healing modality.

Mr. Trivedi has been identified as a man full of miracles because the abilities and things he has proven capable of through scientific application and assessment is not fully understood by science today, but have unquestionably proven itself to be true.

What is known is that this unique individual has the ability to transfer energy through his thoughts, which are directed by his intention. This energy acts as if it comes from a form of Universal Consciousness, performing intelligently, universally and fundamentally as a basis for all living and nonliving forms or entities on this planet to transform in great ways that act in order to improve the conditions and foundation of existence on this world.

We have met many major and world-renowned scientists and other individuals that are identified as “experts” in the areas of consciousness and biofield energy, each with their own interpretation or assessment of the nature or origin of the Trivedi Effect through the lens of their personal knowledge and expertise. Currently, we are not attempting to explain the nature and origin of this energy as we find it does not fit into any existing beliefs or paradigms available on this planet.

However, by way of scientific verification, we are aware that its impacts are universal and can be applied to both living and non-living substances with seemingly limitless capacity that has exceedingly wide-reaching applications for the betterment of the world.

"I KNOW THAT I RECEIVED THIS GIFT FOR A HIGHER PURPOSE AND TO SEEK THE TRUTH. IT IS SIMPLY MY ROLE TO BRING THIS ENERGY TO THE WORLD."